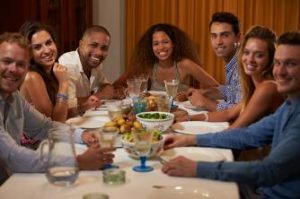 Sometimes international assignments fail, not because the executive who gets transferred can’t acclimate, but because their family can’t. That ruins the entire project, because they’ll have to go back home, or worse, the executive may wind up leaving the company.

About a year ago a senior executive from Europe called and said, “Candida, there is no problem with me, I am doing okay, but my wife is ready to leave. She is lonely and can’t make friends. She thinks no one likes her. I keep introducing her to people, but she thinks people in the United States are rude, cold, and difficult to get to know. She feels alienated, it has become so bad that she does not want to leave the house.

I took her to a party that a colleague had and that made matters worse. After the party, she was so frustrated, she threatened to take the baby and go back home. Back home is thousands of miles away and in another continent.
I won’t be separated from my family. I have run out of options. I am calling you as a last resort.”

He hired me. I met with the wife and asked her to explain to me what had been happening. She told me that Americans seemed to be loud, rude, cold and superficial. Because of that, she had been having a hard time making friends. She told me she attended a party and people barely spoke with her. The hostess did not introduce her to the other guests. She was shown the entire house. She was even shown the basement, and to her, that was very rude, because in her country only a servant would go in the basement.

At this point, I discovered something very interesting, that based on her beliefs of what constitutes a friend in her culture, in the American culture, the complete opposite applied. For example, American’s take pride in showing off their homes, it constitutes trust between people and is done to make guests feel at home. In her culture, a guest would never enter the basement because that would mean that the host would place her at the level of the hired hand. Naturally, you could see why she thought no one liked her.

However, it goes deeper than this, it would be really hard, almost impossible for her to make friends in the United States if she didn’t learn how, and if she were not made aware of some cultural differences that were making her feel so miserable.

I spent some time educating her on friendship differences. In her culture, friendships are based on knowing someone for years, friendships are cultivated within the family unit and friends are treated like family.

Once she realized that the approaches to making friends in the US were very different than in her culture, she began to feel better.

As long as she held onto the belief that American’s are rude and superficial, making friends would have been almost impossible for her.

I helped her follow up on some of her interests and we set up some tasks for her to complete. Within a short period of time she joined a gardening club, the local gym, and a mom and baby playgroup.

We had a scheduled appointment for a follow-up, when I called to confirm, she asked if she could switch the date because she was meeting a new friend for lunch.