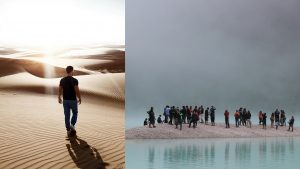 What does the concept of these two dimensions mean for you as a leader? Why would it even matter? Today I write about these two elements knowing that it will help you not only function better in your job, but help you lead effectively.

Before we begin, though, let me explain and define each type: First, no culture is exclusively individualist or collective, not mention individuals within each also vary according to personality. Most, however, tend to be MORE one than the other. In addition, neither is wrong or superior/inferior to the other, they are merely different. Understanding those differences and knowing how to apply them in your work life is what matters and what this article is about.

Typical individualist characteristics of each are as follows:

Individuals from predominately individualistic cultures tend to identify primarily with the self and with their own needs being satisfied before those of the group. The tendency to care for oneself and being self-sufficient is a dominant characteristic. Independence and self reliance are stressed and highly valued. By and large people in these cultures tend to distance themselves psychologically and emotionally from each other. Being part of a group is not essential for one’s identity or success.

On the other hand, individuals from a predominately collectivist culture have their identities meshed with that of the group, the family or the work team. The survival and the success of the group ensure the well being of the individual. In these societies, protection to the individual is guaranteed by the group. Harmony and interdependence of group members are highly valued and group members are close psychologically and emotionally to each other, but distant toward non-group members.

So how can this information benefit you and how can you spot the differences immediately?

To explore this I share a true and personal story:

While living overseas, I had an electrical issue in my apartment, a member of my network sent over an electrician to fix the problem. He arrived and began working on the issue; he needed a few new parts and said he would be back later with the part to finish the job. The next day, he arrived with the part, fixed the problem and was very pleased with himself. I asked him how much I owed him; he said, Oh my goodness, nothing of course.” I asked if I could I buy him lunch. He said, “Oh no, that is not necessary.”

Didn’t he understand that what he did was work? Didn’t he need to make a living? This was very surprising for me, because in my culture you pay or barter such services.

I experienced similar situations during my overseas living when my friend sent over a manicurist to my home to give me manicures; she never would allow me to pay her. These patterns continued during my time overseas, for example a friend of a friend helped us move furniture into our new office, and a seamstress would hem clothing for me all without ever charging me.

At first I thought, they must want to be kind to me, because I was a foreigner and they wanted to make me feel welcomed, but as time moved on, I realized that that was how things worked over there. It was how they maintained a sense of community. How they looked after each other. The primary value was placed on people and their relationship to people, not on goods and services.

That does not mean these professionals did not make a living, they did; they charged those outside of their network, but if you are an insider you don’t get charged, but you are also expected to give back when they are in need.

Look around your environment, is this the common type of behavior, if you answered yes, chances you are living and working in a collectivist society.

Let us explore this concept a bit further by examining the behaviors of these two different ways.

I will describe a few behavioral patterns; try to decide whether they tend to be individualistic or collectivist by nature:

I hope most of you were able to quickly determine the differences. But now let us review.

If people give cocktail parties, the tendency is individualist, because of the casual superficial contact with a lot of people; collectivists tend to associate with fewer people at a time.

If in your organization employee rewards are offered, you are working in a predominately individualist mindset because the company singles out the individual over the group.

Contracts keep people honest; collectivists expect honesty or the member will be shunned from the group. In addition, if you work in an environment where everything is written and reviewed by your legal department, chances are your environment is that of an individualist attitude. In collectivist cultures the spoken word is valued over a written contract. If there is a contract, it can be modified at anytime.

Long term relationships tie people down; individuals from predominantly individualist cultures move around a lot, so they are less loyal to the place and the people in those places, where as people in collectivist societies rely on their inner-circle of contacts for support, belonging and to get assistance when needed.

Self-help books are common in individualist societies, peoples from these cultures tend to seek counseling outside the inner group of friends and family and rely on books to help them attack, understand and deal with complicated issues. Going outside the group for assistance is normal and acceptable.

In contrast, in a collectivist culture, people rely on their inner network of friends and family for support during times of stress or crises, one would never dream of discussing delicate matters with those outside of the tightly held inner group. The inner group offers support and help to insure the survival and well-being of the individual. Going outside the group could be disastrous and shameful for the family and could result in the individual getting shunned or disciplined from the elders or the leaders of the tightly held group.

If People answer the phone by giving the name of the organization they share a collectivist mindset, because giving your name would put you before your association. Something someone from a collectivist culture would never do.

Of course, with today’s technology, no one barely answers a phone, but the gist still remains when interacting and having conversations with individuals, do they tend to refer to their families, their teams, their company more than themselves? If so, chances are they view themselves and their surroundings from a collectivist standpoint.

If you company or the people around you adhere to tradition, chances are they value elders and senior people are listened to. Tradition is honored in collectivist cultures. They don’t re-invent the wheel, the wheel has been established from the past, and if it worked then, it will work today.

To better understand this concept, Look at how individuals speak, if they go back to expressing the root of tradition and how it is important, chances are they are collectivist by nature, if they tend to want the new and improved and seek change, they tend to behave more individualist. The same applies to a company’s culture. Some companies’ foster interdependence, the family attitude and mindset prevails over the individuals of the company. Other companies expect fast results and quick performance, they move swiftly and honor individual contributions over that of the group.

If decisions are made by consensus chances you are in a collectivist environment. In a collectivist culture group decisions prevail over individual decisions, this way no one feels left out. The majority rules and the minority get left out. This is a way of maintaining harmony and peace within a network with a familial way of operating.

If inter-group rivalry is strong in your organization be aware that within a group collectivists tend to stick together and conflict is keep to a minimum, they will however, compete with other groups.

This is one area of team management that often times get overlooked; especially when there is inter-departmental team conflict, hoarding of information and competition. Addressing this type of mindset, will help your teams function stronger and improve the operations of your organization.

I hope through these brief behavioral patterns you can see the relationships and connections within your own life circle? Do you see some of these behaviors at your organization? Which are the dominate tendencies? Understanding these concepts go far in establishing authority and success for yourself and for those around you.